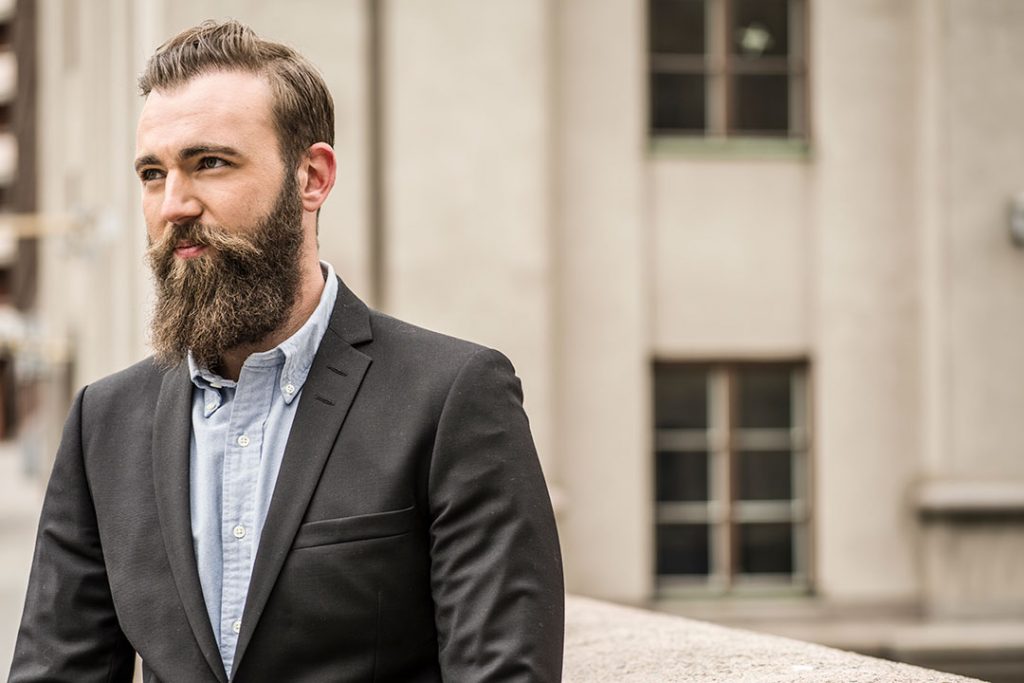 – When I was around 21 years old, I was always the “thin-haired one” in the gang. It wasn’t really something I used to see as a big problem, but you thought about it clearly. My thinning hair was actually something I noticed at 19, so when I met my current wife at 22, we tackled it together and I filled in my high temples,” says Fredrik.

– I started thinking about my thin hair when I was around 19 years old. Somehow I was used to it and we always used to joke about it. When I saw a picture of my father when he was in his 20s and 23s, I saw that he had also started to have bad hair at a very early age. When I was 22, my future wife took a picture of me where I really cringed when I saw my hair.

Fredrik is, if he may say so himself, a moderately fat and moderately happy man his prime. He works as a salesman in the construction industry, which is an industry he has been around for most of his life. In his spare time he spends a lot of time with family and friends and travels a lot with his wife. For the past three years, the project of building his new house has taken up most of his time.

– We tackled it together and started looking at solutions because we thought there should be something we could do about it. When I came to think of it, I had actually had a client who had a hair transplant, so we started calling around and looking up as much information as we could about hair transplants. Booked consultations in several places and the first meeting was with Maggie at Nordic Hair. She gave me great information and it all felt very right and obvious, we also looked at the pictures and saw that hair loss was in the genes. So after this I was determined to fill in my very high temples. After meeting Maggie, I actually cancelled my other consultations, because I felt very confident.

What were your thoughts before the treatment?
It was about 1 month to treatment from the time I made up my mind after the consultation. She explained very well how it was done and I also watched some on YouTube how it is done. There was curiosity and excitement. Tried to figure out what it would look like after treatment so asked a lot and searched the internet out of curiosity.

Tell us about your experience during the treatment day?
When I arrived at the clinic, I felt very good. The anaesthetic injection felt a little but then the anaesthetic kicked in and I felt nothing. The treatment took just over 7 hours with a break so for me it was a lot of patience.

It was all very exciting. It was the first “big hospital experience” I’ve had, never having done an operation or anything like that before. During the transplant, they were checking up on me a lot and talking to make sure I was doing well, which I thought was great. Made good contact with those at the clinic which made me feel very safe and at home.

Afterwards I looked swollen and had bandages and stuff on, a bit funny. Was clearly tired too, but otherwise it was no big deal.

How was the healing period? Did many people ask or wonder?
I used a hat for maybe 3 weeks. Then the hair started coming out and it wasn’t nearly as bad as I thought. It was quite nice actually because by chance I was able to do the hair transplant during the Easter holidays. So was free 4 days after, which may be why I look so lightly on it all, hard to say. My birthday was a few days later but I was wearing a cap.

There weren’t that many people asking and it wasn’t something I thought about. I’m not the kind of person who gets carried away, so I just went for it. People do their boobs, butts and all kinds of things today so really think a hair transplant is normal.

What’s the big difference now?
The big difference now is that along with the beard you can have a real haircut and style. Not having to “comb over” the bald part feels good. Det var inte så att jag led av att inte ha hår, utan att jag har ett bra självförtroende. They are simply much more fun and provide a better overall experience of having good hair. Having a decent haircut is something you like to have when you’re 25. You present yourself with your appearance and your hair makes a very big difference.

By the way, I had the same hairdresser both before and after, he was super fascinated and wanted to take pictures. He was almost more surprised than me haha.

If your friends started to lose hair, would you recommend them to do a similar procedure?
Yes, every day of the week, absolutely, really! If you can afford it and are prepared to wear a cap for 3 weeks, you shouldn’t hesitate for a second. I would easily do it again, it’s so worth it. It’s such a “small” procedure for such a big thing as hair actually is. I have recommended many to do so. So glad it’s possible to make a change like this so easily.

Do it as early as possible is my advice to you, it’s the same advice I got and it was the best thing I did.